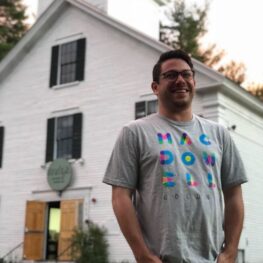 Jared Mezzocchi joins DCC from the School of Theatre, Dance, and Performance Studies, where he is an Associate Professor. Mezzocchi is a multimedia director and designer for theater and received his Masters of Fine Arts through Brooklyn College’s Performance and Interactive Media Arts. He was awarded a Princess Grace Award in 2013 as the first projections designer to receive the honor. He has designed productions in New York City with 3-Legged Dog (Downtown Loop, SpyGarbo), Baryshnikov Arts Center (Robert Wilson’s On The Beach), HereArts (You Are Dead. You Are Here.), Builders Association (Jet Lag 2011), Rob Roth (Screen Test), and has toured nationally and internationally with Big Art Group (SOS, The Sleep, The People). Regionally, he has designed for Center Stage (Stones in his Pockets), Cleveland Playhouse (Breath and Imagination), Milwaukee Rep (History of Invulnerability, The Mountaintop), and CompanyONE (Astroboy and The God Of Comics). Locally in DC, he’s designed for Woolly Mammoth (Totalitarians, Elaborate Entrance of Chad Diety), Synetic Theater (A Trip to the Moon), Theater J (Race, Yellowface), and Studio (Astroboy and The God Of Comics). As a director, he has spent the last 6 summers directing original work at Andy’s Summer Playhouse, located in Wilton NH (Donkey Xote, Dick Tracy, The Lost World, The BFG, The Little Prince, The Block). In 2011, he won Best Original Play at the New Hampshire Theater Awards for his writing and direction in The Lost World. Outside of theater, Jared co-designed with Guilio Cappellini for Design Week in Milan Italy, for Connect4Climate and Alcantara. and this year will design the entrance and immersive experience for a Surf Museum in Montauk, NY. Jared has also taught multimedia design courses at NYU’s Playwrights Horizons and Brooklyn College’s MFA program in Performance and Interactive Media Arts.